“A rock star. A powerhouse”, the judges introduced their enthusiastic commentary on Revolution’s performance in the World Championships final for five-year-old dressage horses. “For the ground-covering and powerful trot, 9.8, for the rhythmic, over-tracking and relaxed walk, 9.0, for the balanced, clearly uphill canter, 10.0, for the constant submission, 9.3, and for the perspective,10.0.” With a total score of 9.62, the premium stallion of the Hanoverian licensing and Champion stallion of the Danish licensing, Stallion Market top price, winner of the stallion performance test (seven times the maximum score of 10.0) and Danish Dressage Horse Champion (four times the maximum score of 10.0) could not be denied the 2018 World Championship crown.

In 2019, Revolution again received amazing scores in the World Championships final of six-year-old dressage horses with his rider Andreas Helgstrand/DEN (trot 10.0, canter 9.6, walk 9.0, rideability 8.8, perspective 9.8, total 9.44) and ceded victory by a hair’s breadth. At the subsequent Danish Championships, Revolution was awarded 10.0 for all three paces. He won the gold medal with an overall score of 9.6.

From his first crop of foals, the Helgstrand stallion ROCKABYE S was licensed in Westphalia as premium stallion and in Oldenburg.(See his page on my site)

The sire Rocky Lee, by Rock Forever I NRW, who was successful in Grand Prix, and with the thoroughbred Justinian xx on the dam’s side, was a premium stallion at his licensing, third at the “Turnier der Sieger” in Münster and fourth at the German Championships for four-year old stallions. Ridden by Stefanie Wolf, he became Westphalian Champion, was internationally placed up to Inter I and was victorious up to Inter II. Rocky Lee’s first offspring are successful at high-level in dressage, such as Lisa-Marie Klössinger’s internationally successful Rockford Dreams.

The dam’s sire Rouletto goes back to the Holstein line 776.

“A Premium Stallion by Rocky Lee/Rouletto was sold at the record price of 1.2 million Euro. He will move to his new stall in Denmark with Helgstrand Dressage Stable. The sold-out Niedersachsenhalle celebrated the “Million-Dollar-Baby” with standing ovation.

The Westphalian-bred youngster by Rocky Lee/Rouletto (breeder: Yasemin Yanik, Essen – exhibitor: Detlef Ruddat, Kirchlinteln) was already treated as top-priced horse after his presentation on the triangle and rewarded with applause after having been nominated Premium Stallion. When auctioneer Daniel Delius accepted the bid at Euro 1,200,000 after a long, exciting bidders’ duel, the audience erupted in thunderous applause and dressage rider Andreas Helgstrand insisted on performing the lap of honour himself with the Premium Stallion. “It is a historical event that the one-million-Euro-mark was “cracked” here in Verden,” said Auction Manager Jörg-Wilhelm Wegener. And Breeding Manager Dr. Werner Schade added: “It has been shown that the licensing collection included some very special dressage stallions this year.” 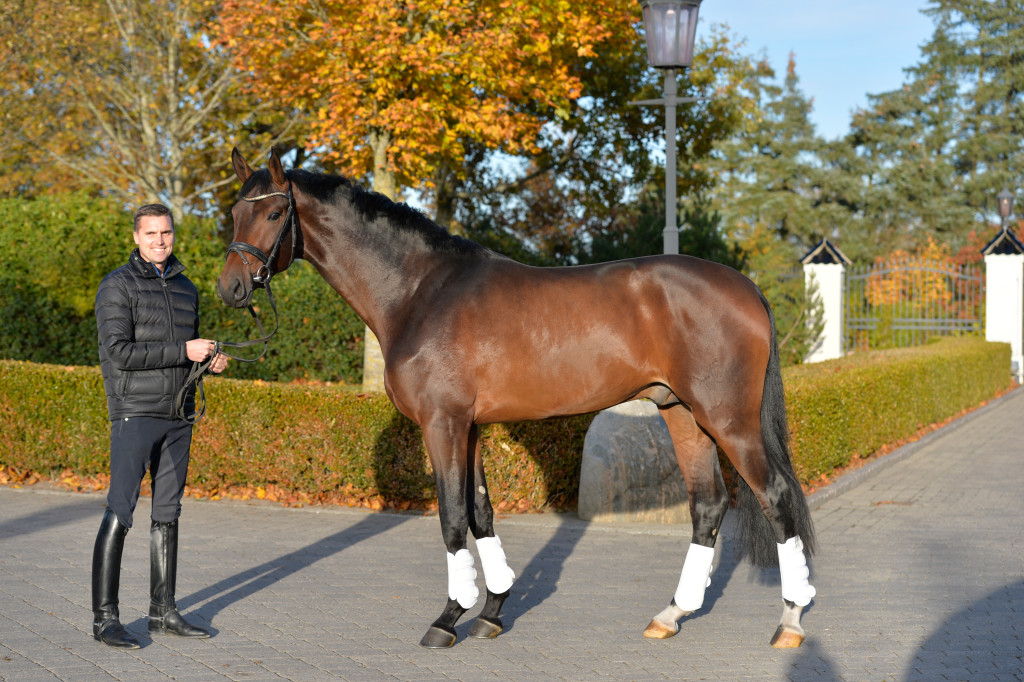