Sire – Vivaldi was proclaimed ‘Preferent’ by the KWPN in 2018, and is one of the most sought-after sires in modern breeding. His son Dream Boy, burst onto the international grand prix scene in 2018 with Hans Peter Minderhoud (who also competed Vivaldi), scoring +73% on his international debut before defeating a field of established horses to win the Olympia grand prix. He followed this up with victory in only his second grand prix freestyle in Mechelen on a score of over 83%. Blue Hors Veneziano, another Vivaldi son to impress in 2018, won the Louisdor Cup for developing grand prix horses in December, on a score of over 75%.

Damline – Viva Gold’s dam Weihronce is a daughter of none other than the fantastic Weihegold OLD, who is currently ranked world number one and is almost unbeaten under German ace Isabell Werth. Weihegold was team and individual gold medalist at the 2017 European Championships, won back-to-back World Cup Finals in 2017-2018, and was team gold and individual silver medalist at the 2016 Rio Olympics. She has broken the 90% barrier at grand prix level on five occasions, and in her 38 international grand prix appearances with Isabell, she has scored above 80% on 32 occasions. In her successful breeding career alongside her competing, she has produced two licensed sons in Sir Weibach and Total Hope, and her daughters have produced the licensed stallions For Gold and Dodo Weihgand, who was reserve champion of the 2018 Oldenburg licensing.

Damsire For Romance I is the epitome of a modern sire, and is from a Voltaire dam line that has been accorded great success. Blessed with three excellent gaits, his canter and trot can only be described with superlatives and his character is also noteworthy. He stood out brilliantly in the strong lot of stallions at the 2011 Oldenburg Verband licensing and the enthusiastic spectators in Vechta gave him standing ovations. Having been pronounced Champion Stallion of the licensing, For Romance did not disappoint during his 30-day test in Schlieckau, passing with super scores. He received a 9.25 for his trot and rideability, a 9.0 for his canter and an 8.88 for character. He won his first advanced level dressage classes as a seven-year-old and competed in the final of the Nurnberger Burg Pokal. In 2012, For Romance’s full sister Fasine took the Oldenburg Champion Mare title – a brother and sister winning both these titles is a feat that is so far unique in the history of the Oldenburg Verband.

Third sire Don Schufro was a bronze medalist at the Olympics under Andreas Helgstrand, while fourth sire Sandro Hit is one of the most influential stallions of modern German dressage breeding. Countless top stallions are brought together in Viva Gold

Licensed for breeding with German Oldenburg, Rhineland and Westfalen 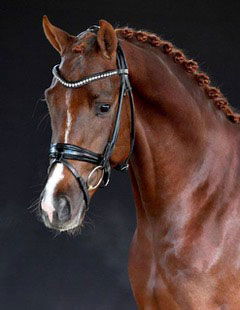 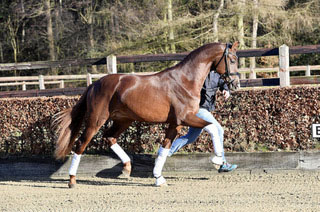 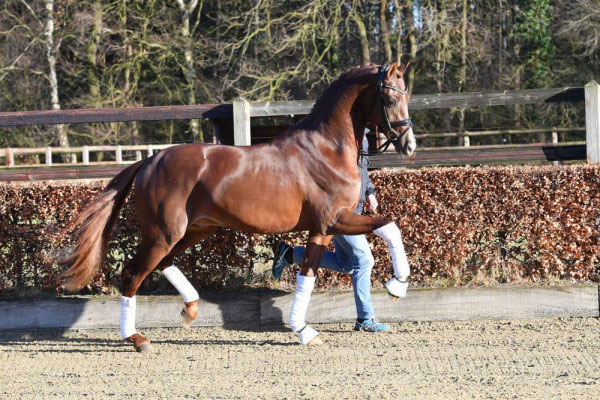