Excellent quality frozen semen available! For those of you who remember the handsome, multi-talented stallion “MARONJO”, you should have a smile on your face by now! I have his frozen semen that has been carefully stored away at Equine Reproduction Concepts in Virginia for all these many years!

Excellent quality frozen semen available! For those of you who remember the handsome, multi-talented stallion “MARONJO”, you should have a smile on your face by now! I have his frozen semen that has been carefully stored away at Equine Reproduction Concepts in Virginia for all these many years! A big and grateful “Thank You” to Vern Batchelder’s wife, Jeanie Hahn and his talented daughter Nora for thinking of me. My connection? I owned his wonderful sire, “MAHON”, who left us much too soon in a freak accident.

I was standing in the aisle of my old barn in Texas (MANY years ago… around 1989!) when I received a phone call from a man with a rather deep and strong voice who introduced himself. “Judy, this is Vern Batchelder calling from Virginia. I admired your stallion Mahon and am sorry that you lost him. He was coming up to be one of the best young sires of his time.” We chatted, and he asked what did I know about Maronjo, who had been born from a breeding when I left Mahon in Germany another year to stand stud. Maronjo had been imported to the U.S. and was now offered for sale at auction. I knew the young stallion, had seen him at his Hanoverian Licensing and was proud of the influence in his movement from my Stallion Mahon. I gave Vern my assessment of the handsome Maronjo, and we rang off. Later I heard that Vern had purchased the handsome grey. And from there, Maronjo had a good life, was a well thought of sire and competition horse, and an all-round athlete. I was proud that he had succeeded and had brought honor to his sire.

Elite Hanoverian stallion, Maronjo (Mahon/Marbod), was born in 1984. Maronjo competed through Grand Prix with a learning trainer.  A kind and patient school master to the end, in his retirement he was used as a lunge horse and taught the “feel” of the FEI movements to many mid-level riders. Sound to the end, his final day was spent teaching a lesson and sauntering in the pasture near his beloved mares.

Born and approved in Germany, Maronjo was imported by Otto Fuchs and won his 100 day test in the United States with the then top score of 138+points. Those who saw his cross country performance were amazed, although the factors of character and rideability enhanced his overall score. He was developed to first level by Reggie Lorenz. His jumping ability was noted and when River House acquired him at the 1990 Glenwood Farm auction, several contenders were jumper riders.

Before the advent of frozen semen and the broadening of the imported mare base in the US, Maronjo bred very large books of mares. He corrected feet, legs and front ends on thoroughbred mares and produced well-grown foals that won at foal shows, breed competitions and AHS mare shows.  Maronjo’s offspring have been very successful in hunter/jumper, dressage and combined training disciplines.  Perhaps they should most be remembered as peoples’ best friends.

Maronjo will live on through his many offspring – active in multiple disciplines. Maronjo has proven to be a valuable broodmare sire.

On the international scene, Maronjo’s pedigree continues to prosper. His sire Mahon now has a dressage index of 140 in Germany, and is regarded as a high producer of dressage horses. His Grand sire, Mahagoni, is the sire of Peron, the highest placed American dressage horse at the 1996 Olympics.

Mahon was born in 1978, and died in 1987. AS a young sire, he already had an impressive ranking, with a dressage index of 140 in Germany and was regarded as a high producer of dressage horses. Mahon *E* was approved at Neumünster in 1980, then performance tested at Adelheidsdorf in 1981 where he finished 3rd out of 61 stallions. He was also approved by the Hanoverian Verband as an improvement sire. In Germany, he stood for Hubertus Poll until September of 1983 when he was imported by Judy Yancey. He stood at Yancey Farms in TX until his most unfortunate death in 1986. Comments from German Trakehner Stallion Book: “Very compact and deeply muscled body; medium size with strong, correct foundation; very distinct breed features; excellent way of going with respect to suppleness, balance, compactness and ground cover.”

Maronjo was an extremely handsome gray Elite Hanoverian stallion by the sire Mahon. Licensed at the Hengstkorung in Germany, he then went on to win his 100-day test with an impressive overall score of 138.06!! His rideability and jumping scores were both over 130 and he received 9s for character, temperament, and willingness to work.

Maronjo competed in dressage all the way up through Grand Prix. His workable disposition always shined. At 16, Vern’s and Jeanie’s daughter, Emma, showed him fourth-level in the CVDA Fall show, placing 2nd in an open competition. This was her first attempt to show above first level. Maronjo also has champions in hand at breed shows, and his jumping technique would not have prevented a different career path. Maronjo has been ranked as high as 7th on the USEF sire list!! Thanks to his offspring in sport.

In his mother’s line there is First Gotthard who is out of the full sister to Maronjo’s grandmother. First Gotthard has a jumping index of 140 points in Germany and another full brother is winning at FEI level dressage there. 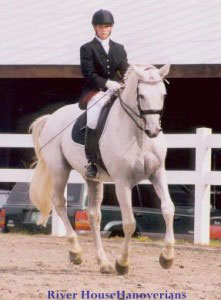 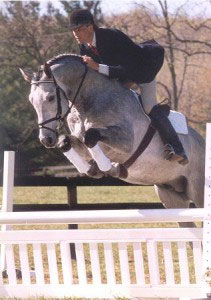 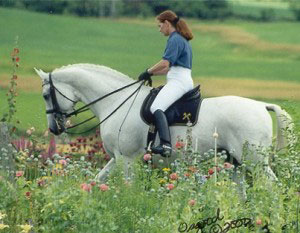 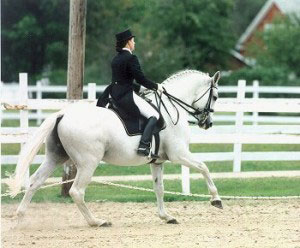 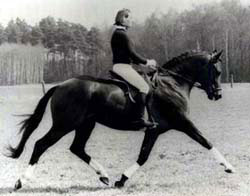 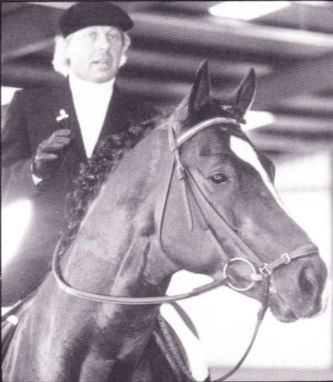