New Inventory now in stock for 2023!
This exquisitely beautiful stallion continues to impress with the consistent quality of his offspring. His reputation as a top quality sire is solid. Tested N/N (not a carrier)of the FFS gene

For Romance is the epitome of a model sire and from a Voltaire dam line that has been accorded great success. Blessed with three excellent gaits, his canter and trot can only be described with superlatives and his character is also noteworthy. He stood out brilliantly in the strong lot of stallions at the 2011 Oldenburg Verband licensing and the enthusiastic spectators in Vechta gave him standing ovations. After a strenuous duel between bidders, For Romance was finally knocked down to Dressurpferde Leistungszentrum Lodbergen.

His sire, Fürst Romancier, was licensed in 2007 and made headlines just two years later when he took fourth place in the World Championships for young dressage horses in the class for five year olds and also fourth place at the Bundeschampionat in Warendorf. That same year he was awarded the I-a main premium for stallions with emphasis on dressage for the quality of his first foal crop. Meanwhile, Matthias Alexander Rath, who was on the third placed team at the WC and the second placed team at the EC, has taken over Fürst Romancier’s training.

The dam’s sire, Sir Donnerhall I, gained trademark status early on in his career. He was the 2nd Reserve Champion at his licensing, State Champion, the record-breaking winner of his stallion performance test, Vice World Champion of young dressage horses and Bundeschampion as well as the main premium winner of stallions with emphasis on dressage. More than 50 of his sons have been licensed. In 2010, three of his progeny took Vice Bundeschampion titles in Warendorf: Silbermond the NRW Champion Stallion, Appassionata and the licensed Snap Shot. He has also sired numerous top auction horses.

In the third generation of his pedigree you find Don Schufro who took the Danish Champion title and won team bronze at the 2008 Olympic Games in Hong Kong under Andreas Helgstrand/DEN. He is the sire of many champions such as the dressage horse World Champion Honnerups Driver”and Uno Donna Unique, as well as the Oldenburg Champion Mare, Rebelle, who took fourth place at the WC for young dressage horses. In 2011, Don Schufro once again left his competitors behind in the FN’s predicted breeding value statistics for rideability.

For Romance’s dam line goes back to Voltaire, a Furioso II son who was well-known in breeding and sport the world over. This line is also the origin of the licensed stallions Dusty, Furinos and Platino as well as many international sport horses that were highly successful in show jumping as well as dressage.
Approved for:
Hann., Oldbg., Holsteiner, Rhld., Westf., all South German Verbands

Visit his HOME page for additional photos and video! https://dressurleistungszentrum.de/en/stallions/dressage-stallions/for-romance-old.html 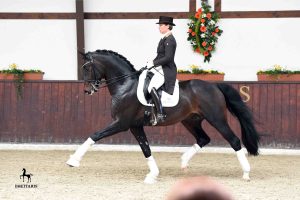 For Romance with Kira Wulferding 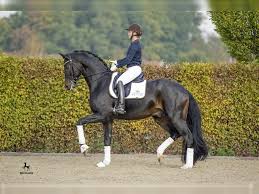 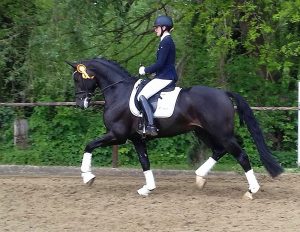 Licensed 2011 in Vechta by the Oldenburg Verband: Champion Stallion

Just look at his number of quality offspring: