Bundeschampion! Westphalian Champion! HLP Winner!
FOR REAL winner of Danish 35-days stallion performance test
Bundeschampion of the 3-year-olds
Westfalen Champion of the 3-year-olds
The first foals of the multi-champion For Real exceed the high expectations: consistently beautiful types with ideal proportions, great lines, three spectacular basic paces and a lot of power from behind. 2022 licensed Hanoverian

For Real did everything right in his first season under the saddle of his trainer Leonie Richter. “This stallion left nothing to be desired in terms of riding qualities, especially since a high elasticity and the good basic gait quality were evident at all times. A typey, very well constructed riding horse with charisma,” the judges commented, awarding the maximum score of 10 for the excellent cooperation of the stallion, who responded immediately to the rider’s aids at all times with mouth satisfaction. The impeccable conformation was rated with 9.5, the energy and elasticity in trot and canter with 9.0, and the tactfulness in walk with 8.5. With a total score of 9.2, For Real was clearly ahead of the competition – just as he was afterwards at his stallion performance test in Denmark.

The sire Farrell was premium stallion at the Hanoverian licensing in 2013, achieved a score of 9.04 at the Danish Championships for Six-Year-Olds in 2016 and is now going successfully internationally. Twelve licensed stallions are to his credit. His daughter Grevens Fakina advanced to mare of the year in Denmark.

In the pedigree follows Lord Loxley I, himself 2004 Bundeschampion of five-year-old dressage horses as well as Vice World Champion in Verden with Jana Freund. Subsequently successful up to advanced level under the saddle of Heiner Schiergen.As a stallion he has 37 licensed sons, almost 100 state premium mares, the Bundeschampions Lord Carnaby, Laetare and FS La Noir as well as internationally successful Grand Prix offspring.

Damon Hill NRW, who follows in third place in the pedigree, also no longer has to prove himself – neither in breeding, where 15 licensed sons, such as Daily mirror/Benjamin Werndl, around 20 premium mares and sport horses successful up to advanced level, nor in sport.In 2012, the Donnerhall-Rubinstein son won Olympic team silver in London/GBR under Helen Langehanenberg and finished fourth in the individual standings. In addition, he won the World Cup Final, team gold and two individual silver medals at the WEG, European team gold and silver medals, two individual silver medals at the European Championships, double gold medals at the German Championships and first place in the Dressage Grand Prix in Aachen. And of course, not to forget two gold medals at the World Championships for Young Dressage Horses. Subsequently, Damon Hill NRW paved the way for the young Jil-Marielle Becks into top sport with victories in Hagen and at the Prize of the Best.

Also from the dam line are Master Jack (by Millennium), Friedensrat (by Ferragamo), Amadin (by Amantus; 1.50 meter show jumping), the reserve winner Be My Dancer (by Benicio) and a premium stallion by For Romance I. 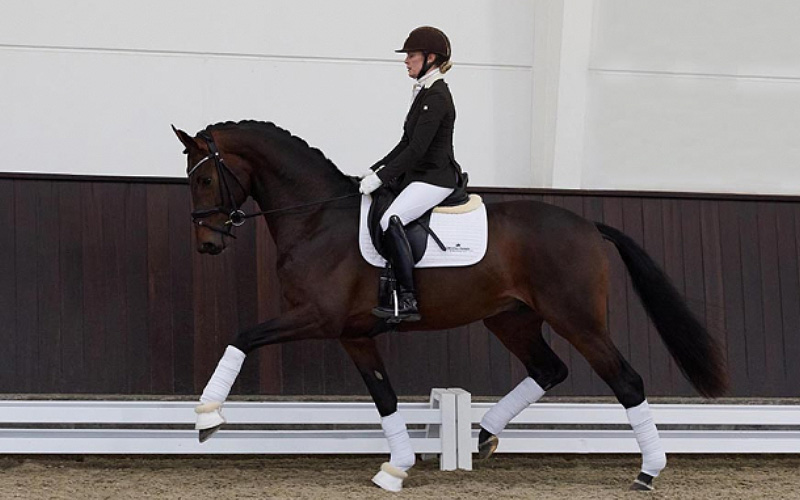